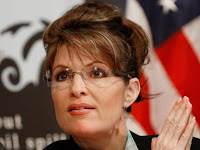 I admit, politics get me frustrated, even though I know that I do not put my hope and trust for my life, my family, or this country in the hands of any politician, but Jesus alone. I'll go ahead an appologize ahead of time for getting on a soapbox here.

It is very obvious to me that both candidates do not know how to solve real problems, especially when the problem requires a spiritual answer. I'm convinced they are incapable of coming up with a response that does not benefit them personally in some fashion. I saw John McCain on the Today show this morning discussing the crisis on Wall Street. I thought, here is a chance to stand above the political muck and give people real answers, but all he did, in my opinion, was repeat the same retoric which may serve to fool a few people and get a few votes, but nothing else. That being said, I'm sure Obama's answer would have been much more obscure, pointless, and self serving.

Someone at some point has to stand up and be a warrior and lead America into God's preferred future. That means making tough choices that are not supported by the polls or the campaign contributors. That means being willing to have the worst approval rating ever and letting history make up its mind years after your gone as to whether or not you did the job right. And just for the record, I personally believe President Bush is making right choices as he is working to secure freedom around the world. He may not be popular, but I think he has been appointed by God to serve our country in this difficult past eight years.

Anyway, I saw Charles Gibson's interview Sarah Palin. I felt he was condescending and disrespectful, and definitely outclassed. ABC did everything they could to undermine her including having their own spin session in the middle of the interview with two former Clinton staffers and one Republican strategist. Personally, I'd like to see a ticket with Sarah Palin for President, and Tina Fey as the VP :)

Palin and the 'Experience' Canard

Yes, Palin Did Stop That Bridge