The Called Out Ones 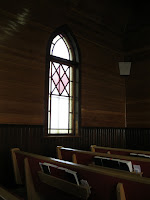 I'm starting a new class tomorrow called "The Church." I've been studying the definition of church at its basic root level. The church as Paul defines it several times in the New Testament is the Ecclesia - the called out ones, the gathering of those called together for a purpose. We talk a lot about how church is not just a building and that we're part of the body of Christ, the big "C" church. I agree and I think we need to emphasize that more today since too many believers have little life in Christ outside of Sundays. However, there is a pattern of God calling his people out to a specific place. God called Abraham to come out of Ur of Chaldees to the land of Canaan; God called Israel out of Egypt to the promise land. The tabernacle and the temple served as a centralized place where God dwelt in the midst of his people. Jesus called his disciples away from their life to follow him, and in Acts we see the community of early believers being called to come together in households. There is nothing special or significant about the centralized meeting place except that God is there. He calls his people to gather in his presence. Paul says we are called into God's own family, into his household. We are being fitted together growing into the holy temple of the Lord (Eph. 2:19-22). This definition feels right to me. Its not about me or how the church can serve me, or did I feel good after the Sunday service. There is no opportunity here for me to do my thing sometimes and God's thing sometimes. Its about Jesus calling me to himself, calling me together with other believers in his name to be his body and carry out the work of his purposes.